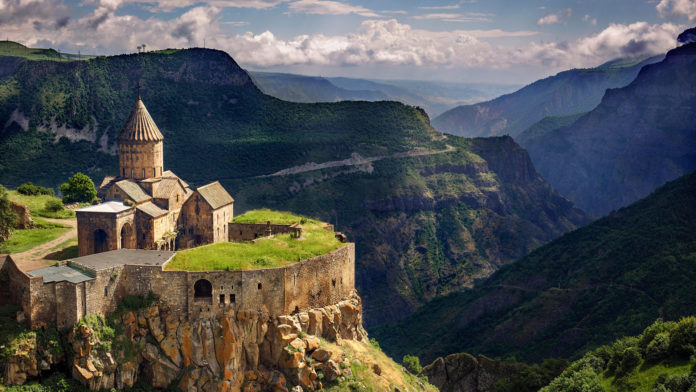 In the center of Transcaucasia lays Armenia, a fascinating country of contrasts. Located south of the Caucasus mountains that edge Eastern Europe and Western Asia, it is characterized by a great variety of scenery—the small landlocked country borders Iran, Turkey, Georgia, and Azerbaijan. As one of the world’s most ancient countries, Armenia’s geographical boundaries today only encompasses a portion of what it once was. After centuries of different ruling regimes, Armenians have managed to sustain their culturally rich heritage and identity through steady perseverance. The country now is at a pivotal moment. The society conjures pride through embodying old traditions while simultaneously keeps a progressive outlook towards a modernized future of the state.

Formerly a member of the Soviet Union, Armenia has only been sovereign for a short time but is rapidly attaining high-growth potential for investment opportunities and human capital. Armenia experienced double-digit growth leading up to the global economic crisis in 2008, from then slowed and saw a 3% YoY GDP increase from 2015. It celebrated its 25th year of Independence on September 21st, 2016, just two months after manifestations abrupted calling for political and social reform. President Serzh Sargsyan appointed Karen Karapetyan as the new Prime Minister on September 13, 2016.

The President has called Karapetyan, “a symbol of change,” set to apply substantial policy changes igniting economic development and building credibility with the public. Mr. Karapetyan has been an aspirational figure in Armenia, his experience spanning both the private and public spheres. He served as the Mayor of Yerevan from 2010- 2011. As a business executive, he achieved tremendous success, channeling that expertise and applying it to the new government.

Solidifying the beginning of an overdue transformation, Mr. Karapetyan made quick structural changes. He appointed technocrats, experts from their fields in the private sector to fill his new cabinet –four of the six newly elected ministers had not held any ministerial positions in the past. “When a private sector representative appears in the public sector, it becomes beneficial for the government in two ways.” He explains. “First, you have a pragmatic approach to everything. Second, you already know how the government can hinder the private sector, and you can look at the issue at hand from a different angle.”

His pragmatic and non-bureaucratic philosophy resulted in a two-stage program to tackle the challenges. The first would last six months, assessing the situation. “This would provide an understanding of the problems and diseases of our economy, short-term goals and quick results.” He says. The second stage, “based on the diagnosis, a long-term program aimed at solving all the identified problems will be adopted. The aim of the Government will be to create favorable conditions that are necessary for the growth of business and by no means impede it.” Economic growth, healthcare, social issues and eliminating corruption are priority items for the government. Like other post-soviet countries, corruption has been a shadowy characteristic of Armenia that has impeded growth. “First of all, we are going to create same market conditions for all market players, and when we succeed, artificial monopolies will not be able to survive in these equal conditions. The fight against corruption is one of the key elements of our Program.” He asserts.

A transparent investment climate to attract FDI is of particular importance also, not only for growth but to create an engine that will influence new management cultures for businesses in Armenia.

The country also depends on trade with its neighbors to promote development. The blocked borders along Turkey and Azerbaijan have created difficulties, and the cost of transport to Iran and Georgia have increased. The Program addresses this issue by reforming the tax and customs services to make tax collection less arbitrary.

“A business cannot survive when the tax and customs systems become an obstacle for development.” The Premier states. “Regarding transportation costs, of course, we have to admit that we have a logistics problem in Armenia. At the same time it’s a good opportunity, as the business community must think wisely to overcome all these problems and to find better ways to export, better ways to generate profit.” He adds.

January concluded Mr. Karapetyan’ first 100 days in office. The government produced a thorough analysis, outlining: per-sector diagnosis of problems, proposed measures to fix such problems, a detailed summary of the 100 days and finally a fourth part relating to the public-private partnership based on the Center for Strategic Initiatives. The Premier is confident that the proposed reforms will deliver positive outcomes. “Active utilization of our intellectual resources will lead us towards more prosperous and stable country.” He says.

The Premier is passionate those visiting the country. Delivering a message of hospitality, which is so accustomed to Armenian culture, says, “it does not matter what nationality you are, or what part of the world you come from.” He continues, “I would like to invite you to Armenia. Our people will do their best so that you can feel secure here and you can have good perspectives for your business.”
April will see the first elections after the constitutional referendum in 2015, which approved changes to make Armenia a parliamentary republic. Mr. Karapetyan describes his vision for Armenia in the future as, “independent, just, attractive and intellectual.” A step towards a better-quality tomorrow for the population and absorption of the status-quo.