Mari Petroleum Company Limited (MPCL) is an award winning, ISO certified, integrated exploration and production company recognized for being the most competitive in Pakistan’s oil and gas industry. 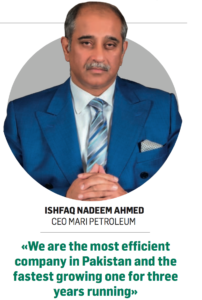 Present in all four provinces, it currently manages and operates the country’s largest gas reservoir at Mari Gas Field in Daharki, Sindh, and is the second largest gas producer with a cumulative daily production of 100,000 barrels of oil equivalent and a gas market share of around 18 percent, “We have the highest share price among all oil and gas companies in the country”, says Mari Petroleum’s CEO, Lt Gen (Retd) Ishfaq Nadeem Ahmad.

“We are the most efficient company in Pakistan, and the fastest growing company for the third year running”, he highlights, referring to the company’s productive combination of having a 70% exploration success rate, the highest in the country and well above the industry’s 33% national and 14% international average, and being the country’s most cost efficient E&P company with the lowest operational cost of under 10% of the gross sales.

In 2018, it managed to post its highest ever production of 34.02 million barrels of oil equivalent energy. In terms of financial performance, Mari Petroleum’s gross sales exceeded Rs.100 billion for the first time since the company’s foundation in 1984, a tendency that continues in 2019. Net Profit surged by 68%, up to Rs 15.4 billion in 2018, and the company is well on track for unprecedented profitability in the financial year 2019. Due to this impressive performance, the company has been recently awarded the “Prime Minister’s Award for Corporate Excellence” and “Fastest Growing Company of the Year Award” at the 32nd Rawalpindi Chamber of Commerce and Industry International Achievement Awards 2019 in Kuala Lumpur, Malaysia. The awards were conferred by his Excellency Dr. Mahathir Bin Mohamad, Prime Minister of Malaysia.

Moreover, one of the company’s main accomplishments is the crucial role it plays in ensuring the country’s food security, as most of the urea production in the country is based on MPCL supplied gas: “We supply 80% of the gas to the fertilizer industry from our Mari Gas field. This results in cheaper fertilizer and more profits for the farmers because the gas we provide is produced locally and much cheaper than alternative sources”, says Ishfaq. Furthermore, as the production from this field was expected to start declining from this year, they managed to drill and connect 19 more wells in the field’s periphery that will ensure the continuity of the supply to the fertilizer industry in the near future, and are now working to enhance this period even further. “This is a major achievement by Mari”, he assures, proudly reminding us that in the last 50 years Mari Petroleum has the unique record of maintaining gas supply from Mari field to the fertilizer and midstream industries as well as the power sector without any interruption, not even the permitted outages.

Due to the company’s current financial success, which allowed them to secure funds for their next five years’ core oil and gas upstream operations, they are now planning to diversify their offerings beyond the exploration, production and sale of gas, oil and other petroleum products. They are particularly interested in partnering up with foreign companies willing to invest in Pakistan or allowing them to invest abroad. As Ishfaq believes that the time is right for MPCL to play a leading role at the international level: “Because of our success ratio and our attitude, most of the foreign companies want to work with us. We are already positioned for them to work with us. If you ask any company, they would prefer to work with us rather than our competitors. We have worked with many multinational companies such as Tullow (UK), MOL (Hungary), OMV (Austria) and ENI (Italy).

Among the different diversification projects they’re potentially willing to take part in, they look forward to setting a gas fired 180-megawatt power plant as well as looking at other options such as investing in renewable energy, in midstream and downstream oil pipelines coming from south to north or working with an already established refinery.

Mari Petroleum’s strengths, however, are not limited to its production schemes. Apart from being recognized in 2017 for its good Health and Safety Executive (HSE) and corporate social responsibility (CSR) practices, it received this years “Overall Platinum Award”, the highest in the overall category of Employers’ Federation of Pakistan’s (EFP) “Best Practices Award for Occupational Safety and Health and Future of Work”. Such acknowledgments reflect the company’s commitment towards the well-being of its employees, the communities where they operate and the Pakistani society in general. As Ishfaq explains, they have an extensive CSR policy, continuously investing in education, health, water supply beyond statutory CSR obligations, “The government’s requirement from us is $30,000 per block per annum but we spend a lot more than that. We have spent millions of dollars over the past decade on various CSR initiatives in different areas. We are now building a special children’s school in our mother field and this will be the best special children’s school in Pakistan. We set up medical facilities and schools, we give free medical treatment in far-flung areas, and we also hire people from those areas on contracts and pay them good salaries so there is a mini revolution wherever we go. We spend around 3% of our income each year on CSR in these areas”. However, there are still things to improve in the sector. While Ishfaq recognizes the efforts being made by the current Ministry of Energy, stating that “the policies that the government has brought in are good and a lot of corrective measures have been taken”, he hopes other proposals being suggested will be implemented soon, such as formulating Shale Gas policy and carving out frontier zones with better prices. With these changes, Ishfaq assures, companies like Mari Petroleum and their potential foreign partners will be able to expand their exploring ventures: “There is a gap between energy supply and demand. For instance, the gas that Pakistan needs is 7BCF( Billion Cubic Feet) per day but we are only able to produce 4 BCF. This gap needs to be filled and for the short term the reliance has to be on imported LNG, but imported LNG is twice as expensive as the gas explored and produced within Pakistan. Our eventual reliance therefore has to be on locally produced gas.”

Despite the challenges, Mari Petroleum’s CEO is optimistic. Having served his country with distinction as part of the military, his leadership abilities have now contributed to the company’s success since his appointment as CEO in 2017 and keep impelling it towards a broader, global scale. “We have been able to enhance the company’s pro t and bring it on the international map”, he assures, adding that as a result, UK based Plimsoll placed them as the 29th most pro table company in the world out of 289 companies analyzed, and the FTSE (The Financial Times Stock Exchange) put them on the list of the top Pakistani companies to work with.

In the future, Ishfaq hopes Pakistan will consolidate itself as a pro table investment destination and Mari Petroleum will attract partnerships with foreign companies from the U.S. and all over the world. “If you wait for the environment to be totally favorable by western standards, you will miss the boat. Now is the time to come in and capture the market because the situation is improving security wise, legislation wise, policy wise, facilitation wise and there is a lot of local expertise here. The next 2 years are very important for the companies to come and invest in Pakistan”, he says. Given his long commanding history and Mari Petroleum’s impressive credentials we certainly believe so.