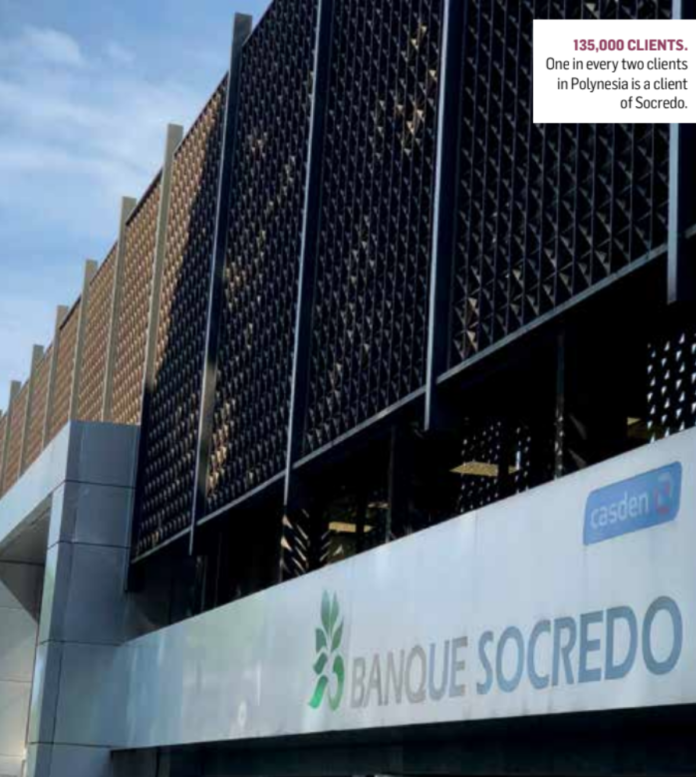 Founded in 1959, Socredo was the first bank of French Polynesia. Having established itself as an industry standard across the years, today their participation in the economy and the social environment of the country is massive, with a 47% share of the local credit market, and close to 42% of the deposits market. “We have 135,000 clients”, says General Director Matahi Brothers,“This means that one in every two clients in Polynesia, is a Socredo client”. Through their policies of investment and innovation, the bank has successfully aided in the creation and development of various other industries, and has shown their immense commitment to the advancement of their community. “Because of our size, we have a systemic role in the economy of the country”, adds Mr. Brothers, “This means that if the bank does badly, so does the country, which is a large responsibility, but one we are happy to take on”.

Socredo was established by two equal shareholders: the country and the French Development Agency. Together, they not only led the bank to great success, but also helped boost the economic development of the country, weathering the 2008 financial crisis that caused their team to reduce the number of employees from 610 to the current 460. “In 50 years, the partners didn’t take any dividends”, explains Mr. Brothers, “everything was reinvested, sometimes in sectors that weren’t profitable, like the fishing industry”. In 2007, the Banque Populaire joined with a 15% share, and although their model has since changed, Socredo is still following a social-minded vision.

“If the bank does badly, so does the country, which is a large responsibility but one we are happy to take on”.

After the crisis, Socredo focused its efforts in revitalizing the tourism industry, providing finance and investments in many hotel projects. Today there are numerous four and five star hotels in the country, and between august 2017 and august 2018, tourism increased by 17%. “Hotels were losing money a couple of years ago”, says Mr. Brothers, “Now we are living a boom in the sector, partly based on the investor confidence that I believe we helped improve”.

“We care for everybody in the islands, no matter their size as clients”.

In establishing the role they want the bank to play in the upcoming years, Socredo have devised a strategy determined by two main axes, both of them aimed at their goal to provide durable development for the region. The first one is sustainable development, a regional policy that prioritizes Polynesian investors, and finding new partners. “We want to create partnerships with other countries and their financial institutions”, says Mr. Brothers, “One of them, for example, is the FDIP, an association of small Pacific countries focused on development”. The other axis revolves around innovation within the industry, which involves finding the funds in order to make industries fully competitive and efficient. “Innovation is key for durable development”, adds Mr. Brothers, “Not only in terms of digital solutions, but also revamping how we approach management”. Although their focus has mainly been local in the past, this new strategy looks to position Socredo in
the regional stage.

Throughout their 60 years of operations, Socredo has also played a major role in the inclusion of the unbanked population, a role they see as a fundamental part of who they are, and what defines their brand. “We don’t have a selective process to welcome clients”, explains Mr. Brothers, “We care for everybody in the islands, no matter their size as clients”. As they enter a new age of political and financial stability in the country, Socredo is now more than ever convinced of the part they must play in order to achieve durable development. “In future years we will have to create closer ties to our neighbors”, says Mr. Brothers, “It will help us grow not only as individual nations but as a region”.